Whats on your Worktable Wednesday: Fabric!

Whatever Inspires acquired a beautiful older sewing machine from my mom (thanks mom!) and we have been busy coming up with all the different ways we can use it.  We recently hit on something that puts both of us to work, Erik doing a lot of the original designing, me sewing and adding details, and both of us picking out fabrics!   So this week, we have lots and lots of fabric on our worktable: 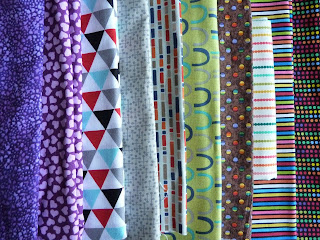 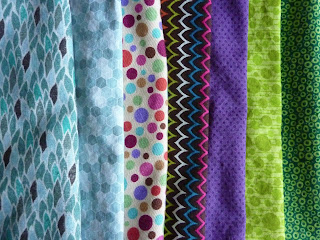 If you know us, you can probably tell which ones I picked and which ones Erik picked, although we only bought ones we both agreed on.  My favorite though is the left most fabric in the bottom picture.  It reminds me of the book "Where the Wild Things Are" by Maurice Sendak (my favorite children's book ever!), which is good, because what we are making is stuffed monsters: 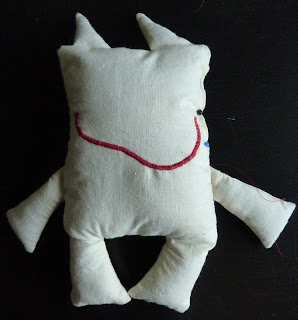 I haven't sewn in a really long time (probably since I was in high school school).  My mom loves to sew - we always had the best halloween costumes, and she often made us clothes, bags, stuffed animals, etc, but she was really great at was quilting - and she was always trying to teach us.  I learned the basics, but I just wasn't that into it.  I would rather help my dad build our swing set or fix the toilet, I was just that kind of girl!  But I always helped mom when she was making stuff for us, that was kind of the unwritten rule - if you asked for something, you had to help.  So, I did a lot of turning things right side out, stuffing things, hand sewing and the all important watching.  I learned a lot more from mom that I ever thought I did, because even though I have never made a stuffed animal before the little guy above was my practice one, and I only called her a couple of times during the process.  So far, we have finished one monster, he was a gift to the cutest little "monster" I know, and of course I forgot to photograph him before I gave him away, so they're not the best pictures, but check out how cute he came out! 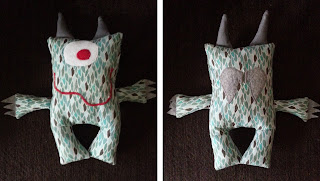 I just love this fabric and I just love his little wings in the back.  We stitched everything down completely because I didn't want it getting pulled off by little hands, but I think it actually made him better instead of being a compromise.  I'll probably end up making myself one of these, because he's so darn cute! We have a bunch of designs ready to go, so hopefully in the near future we will have a bunch more monsters to add to our collection! They are really fun to see come together.

What's on your worktable this week, and which fabric do you want to see us make a monster out of next?
Posted by Carolyn at 4:16 PM

Email ThisBlogThis!Share to TwitterShare to FacebookShare to Pinterest
Labels: "Where the Wild Things Are", fabric, gifts, inspiration, monsters, sewing, stuffed monsters, What's on your Worktable Wednesday

Sites that inspire me!